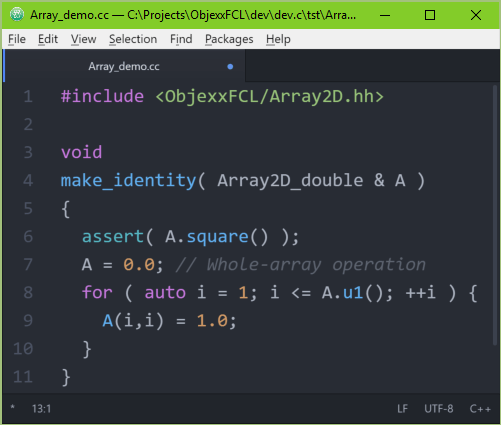 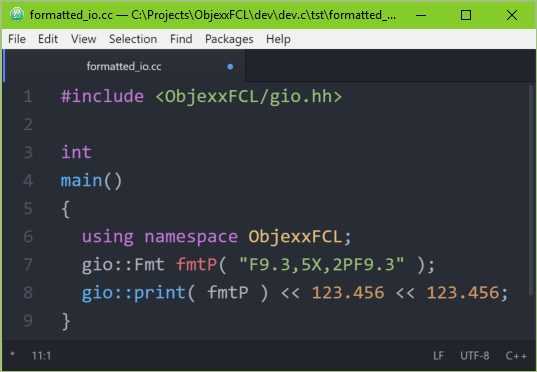 The ObjexxFCL is an open source C++11 library that provides Fortran-compatible array, string, formatted i/o, and intrinsic function support for Fortran-to-C++ migrations and some additional components and capabilities to support reengineering and modernization of technical C++ applications.

The core components of the ObjexxFCL provide the array, string, and intrinsic function support for Objexx Fortran-to-C++ conversions and Fortran—C++ integration.

ObjexxFCL Arrays have the attributes of Fortran 77-2008 arrays, including:

Fstrings have the attributes of Fortran strings, including:

The byte type is a C++ equivalent of Fortran's INTEGER*1.

The ObjexxFCL contains components that support the evolution of technical applications after conversion from Fortran to C++ or as part of a modernization process. There are also components and functions that provide useful services for technical computing that C++ and its standard library are missing.

Technical applications often depend on fast, safe arrays and the ObjexxFCL provides some powerful array support, such as the ability to migrate to dynamic array sizing via explicit calls or a decentralized automatic mechanism for the common situation where the sizes for different parts of the array dimensions are determined in locations scattered throughout the code.

The Arrays provide these capabilities that Fortran arrays lack:

ChunkVector is similar in interface to std::vector but uses multiple contiguous "chunks" of user-specified size to avoid allocation failures for very large vectors in a fragmented memory environment and to greatly reduce the performance cost of resizing operations. In typical use there is no performance degradation for ChunkVector element access compared to std::vector.

These are lightweight wrappers around C-style arrays and strings that catch memory errors such as leaks and buffer overflows. This allows the safe use of functions requiring those C-style types.

Vector2, Vector3, and Vector4 are fast, loop-free 2, 3, and 4 element vector class templates that can give technical applications a big performance boost over arrays. The Vectors provide a set of fast operations such as magnitude, normalization, distance, min/max, and dot and cross products. The Vector types interoperate with std::vector, std::array, and the ObjexxFCL Arrays.

In addition to the Fortran intrinsic support there are numeric, string, and character functions that extend and fill holes in the C++ standard library.

The ObjexxFCL is included with our Fortran-to-C++ conversion projects and can be licensed separately. The ObjexxFCL is provided in C++ source form with a perpetual, royalty-free license that allows client modification.